My previous post about Riga mentions that, because of an overbooking, I stayed in a five star hotel! That hotel happened to be bang in the middle of Riga, meaning the old medieval town, a UNESCO World Heritage Site and virtually everything else was well within walking distance – perfect!

First on my list was the Tourist Office, and this happened to be sited in the House of The Blackheads, the historic meeting place for various guilds and societies in Riga since 1334, it gained its name from German merchants in the 17thcentury. It has been reconstructed a number of times, most recently after WW2 when it was reduced to rubble. This rising from the rubble can be seen in photographic form inside the house. I have to say that, given the billing the house enjoys, I was slightly underwhelmed by the interior, and found it very museumy, and while quite interesting, not greatly engaging. 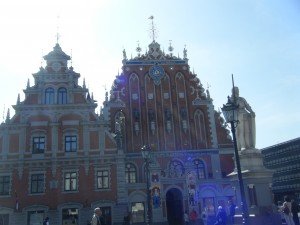 Very close by is the Museum of Occupation of Latvia, remembering Latvia’s Soviet and Nazi occupations, and especially for people of my generation, this is a must see. It is long, but very moving, and a reminder of man’s inhumanity to man.

More light-hearted is the House of the Black Cat, a building with cat on the roof, with its uplifted tail (and rear end) pointing towards the Big Guild House, allegedly offering an opinion on the members of that guild! 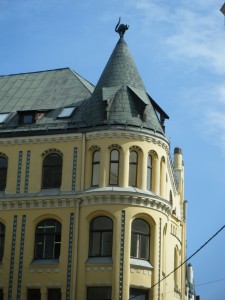 Riga Castle is slightly out of the way, and if your time is limited, I would suggest omitting it because personally I found it quite uninteresting.

That evening, after a typically Latvian dinner of pork and potatoes, I went to the ballet, and saw La Bayadere, performed by the Latvian national Ballet in the National Opera House. It was amazing! The standard was so so high, and I was mightily impressed by the fact that it was so obviously not elitist, as is the case in more western capitals. The prices were within reach of working people, and the auditorium was packed. It was a truly wonderful evening.

The next day I went to have a look at one of the most iconic sights – the Freedom Monument. Standing 42m high and built in 1935, it celebrates the Latvian War of Independence in 1918. Serendipity on the timing of my visit meant that I also saw the changing of the guard. 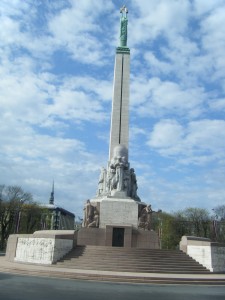 Close by are Alberta and Elizabetes streets which are the best places to see the renowned Art Nouveau buildings. These are astonishing in their attention to detail, as well as in the actual detail. 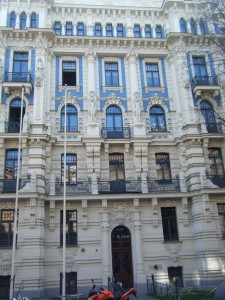 Also in this area are various churches and museums, including Mentzendorff House, a carefully reconstructed picture of the life of a wealthy 18th century merchant.

I also had a look at Riga Central Market, a food and open air market which gave me a chance to watch ordinary Latvians going about their everyday lives. 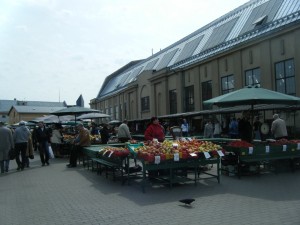 One disconcerting thing I found about the city was the number of apparently homeless people and beggars around, but then current economic realities have made that an all too common sight everywhere.

Notwithstanding this, I would recommend Riga for a short break, some of its sights are fascinating, and prices there are still reasonable.