Yesterday my training for Mount Fuji began in earnest, and I climbed Slieve Martin, near Rostrevor, and then across to Cloughmore Stone.

It was a glorious day, and some of my climb was through Kilbroney Forest, where the ground was dappled in the sun and carpeted with bluebells. 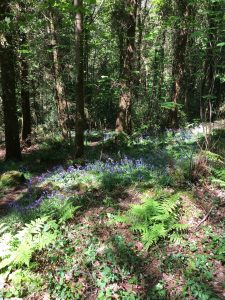 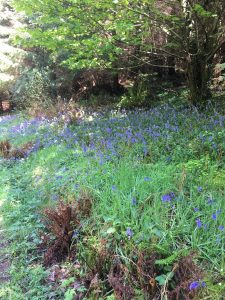 Every so often there were the most breathtaking vistas, some across to the Cooley mountains and Omeath, and others right down Carlingford Lough, to Greenore and beyond. 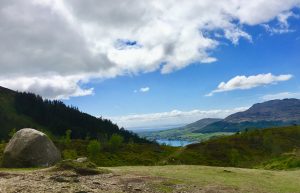 When I got to Cloughmore Stone (aka The Big Stone), I thought of the legend. 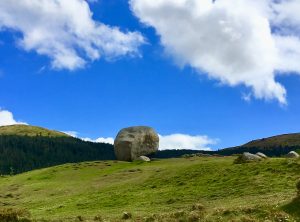 For those of you not from these parts, let me share it with you.
A very long time ago a giant called Finn McCool lived in what became known as the Cooley Mountains, and was lord of all he surveyed. One day, however, on the opposite side of the lough, there came on the scene a rival giant ,Ruscaire.

Finn McCool took great exception to Ruscaire’s appearance, and suggested he leave. Ruscaire refused, and a battle ensued. Because the lough separated them, this meant they were chucking anything they could find at each other. Finn found an enormous rock and with a mighty heave, threw it across. It hit Ruscaire, and fatally wounded him. Finn saw that he had defeated the usurper and, tired out after his exertions, lay down to rest. So exhausted was he after his efforts, he slept, and slept and slept, never to waken again.
The enormous rock is still there, Cloughmore Stone, and if you look very carefully from the Stone across to the Cooley Mountains, you can just make out the silhouette of the giant lying across the top! 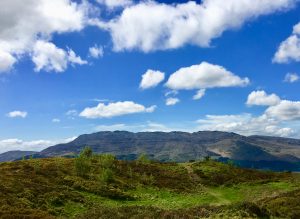