Back home in warm Austin, Texas, a city of college-aged boozers and barflies, everyone drank. I even considered myself a liquor connoisseur (and yes, the way you say it matters.) On weekend nights the level of intoxication ranged from tipsy to plastered and people considered themselves lucky if they make it home by sunrise. Well folks, in Scotland, drinking is an entirely different phenomenon. While drinkers in Scotland tend to get equally (or more so) inebriated, there is a distinct culture behind drinking that makes it seem much, much more classy than in America. 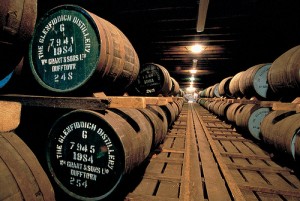 So if you’re ever on that side of the pond, walking down Whisky Trail, these are the places where you just have to stop for a world famous whisky tour:

No, this is not the name of a wizarding sport; Glenfiddich is one of the distillery hotspots along almost every Scottish whisky tour. Known for being one of the only whisky distilleries in the area that bottles on site, this Mecca for whisky lovers has been bottling the best for over a century under the same family. Distillery tours are held at Glenfiddich every 20 minutes and it is unnecessary to make a reservation in advance. One of the highlights of the tour is the grand finale—getting to sample some of the 12-year-old Glenfiddich Liquor! Take some time to visit this distillery and embrace self catering in Scotland!

Okay, Cardhu is the crème de la crème of whisky distilleries in Scotland. Not only is the distillery is located essentially at the top of a mountain (alright, hill…whatever) with breathtaking views, it is also home to the world famous blended Scotch Whisky, Johnnie Walker. Need I say more?

If you ever are walking down Whiskey Trail, a nickname given to the  area of Speyside, an area of Scotland that is positively swimming in that malty, liquid gold, you absolutely must make a pit stop at the Glenlivet Distillery. The regular tour is free of charge and includes a complimentary dram of Glenlivet itself! How can you possibly say no?

As a precaution, because things can get a bit wobbly after some time in a malt whisky distillery, it’s always smart to have a designated driver or tour leader who will help you get from one place to another J