The previous day we had seen much of Quito’s Historic Centre by just meandering through the old, often cobbled, streets, because the actual area is fairly compact. 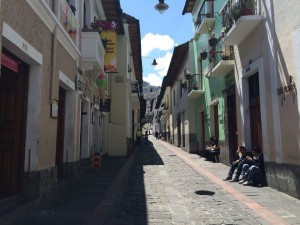 Quito boasts a umber of museums and an even bigger number of churches, but I have to confess, I am not a museum person, nor am I into churches in a big way. If there is one or other of these which is regarded as a ‘must see’, then of course I will go, but otherwise, I am not really interested.
Quito New Town houses many of the museums, and also a number of parks, and is also home to many of the hotels and restaurants, but I decided, because my time in the city was limited, to give the New Town a miss. 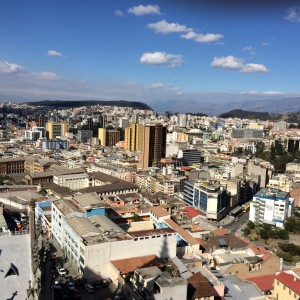 There were a couple of things I really did not want to omit seeing, and the first of these was La Mitad del Mundo, or the Middle of the World. The word ‘ecuador’ means ‘equator’ in Spanish, and the country’s main claim to fame is its location right on the equator. 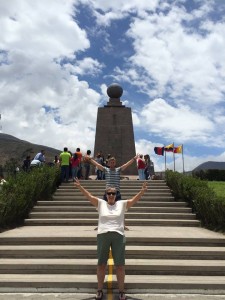 It was in the early 18th century that measurements were taken showing the line of the equator, and although it is now thought to be slightly inaccurate, much has been made of this original site, and it is now a tourist park, with ongoing work to improve it. A 30 metre obelisk stands at the centre, and a line leading from this is painted on the ground, allegedly the path of the equator. The park is definitely a tourist trap, with restaurants and souvenir shops all around, and lots of local visitors, but that doesn’t detract from the fun of being photographed straddling the equator! 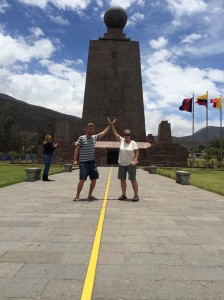 Because La Mitad del Mundo is some 20+ kilometres outside Quito, our visit there took most of the morning, and we returned to the city centre to have lunch. 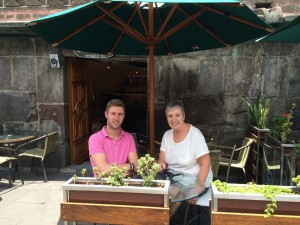 Overlooking Quito is a mountain called Volcan Pichincha, which rises to above 4600 metres. 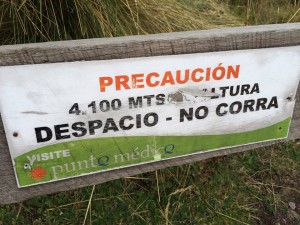 There is a cable car up the side of it which goes a to a viewing point 500 metres lower. It is also possible, seemingly, to walk up hundreds of steps get there, but travel guides advise that this can be iffy because of possible simple robberThe whole thing is the TeleferiQo, and the views from the viewing point are spectacular. 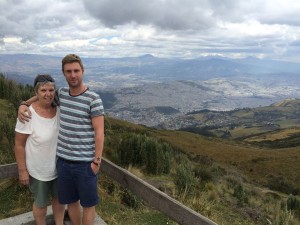 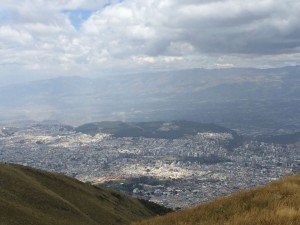 Apparently from here it is possible to hike the remaining distance to the top of the mountain, but I did not even consider it! I had trouble enough getting my breath at 4100 metres, without attempting any higher. At the cable car stop there were a couple of cafes open, but because we were out of season, many of the stalls were unoccupied. Nonetheless, it was a great way to spend the afternoon.
That evening we decided, as we were leaving Quito the following morning, to treat ourselves to a nice meal. We went to a recommended rooftop restaurant which is known for its glorious views over the city. The views were indeed spectacular, unfortunately the food and service weren’t.

However, we refused to let that ruin our day, nor colour our opinions about Quito.
I would have liked a bit longer to explore the city, but I have to say that, from the bit I did see, Quito has very much to offer, and the people are warm and welcoming. I must add that Ecuadorian knits are exceptionally good value and very lovely, and had it not been for the fact that I would have had to carry everything everywhere in my backpack for the remainder of my holiday, I would have had quite a bit home. 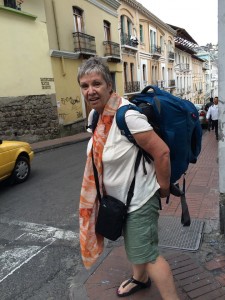