Jet Away From the Rain on Flights to Tenerife

Think of what you could get done with a spare 4 hours. You could give the house a good clean; you could make a run to the shops or restock your cupboards; the workaholics amongst you could spend that extra time agonising over the finishing touches to their big project, or perhaps you’re more inclined to indulge yourself with an extra few stolen moments in bed. 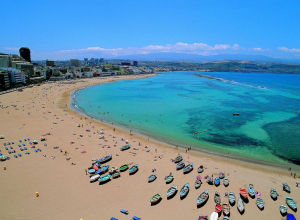 Four hours might not sound like much, and it would be easy to fritter the time away, but think how much better spent it would be streaming through the sky on your way to the sunshine in Tenerife, cheap flights available with Jet2.com. The few hours flight-time will take you a world away. You’ll find the wet and chilly UK to be a much more pleasing sight with a few thousand miles of clear, blue ocean water between you!
With a number of bank holiday weekends on the calendar over the next few months, and with cheap flights to the island in abundance, take the opportunity to enjoy a Tenerife city break. The island welcomes over 5 million tourists each year, so it is small wonder that the island’s capital, Santa Cruz de Tenerife, knows exactly how to treat them.
So if the prospect of a few spare hours to burn sounds like your idea of heaven, here are a few ways you might wish to make the most of your rare time off.
Curious Local Culture
First, let’s hit the shops to stock up on those forgotten holiday essentials. As premier European holiday destination you can expect familiar household names and chains to have a presence down the city’s promenades and arcades, but for a taste of the exotic head to Mercado de Nuestra Señora de África. Centrally located and with a glorious rustic colonial Spanish setting, this bustling market may not have the scale of its continental counterparts, but is just as thriving, piled high with exotic fruits, vegetables, stacks of locally caught, ocean-fresh fish, and delicious native cheeses and meats.
When it comes to cuisine, Santa Cruz is a crossroads for hundreds of cultures and civilisations that have visited the shores of Tenerife over thousands of years. Indulge your adventurous side at one of the islands dozens of award winning restaurants and hidden gems. Over three meals a day you could travel the globe; Santa Cruz’s Turkish, Greek and of course Spanish foods are second to none. With the Atlantic lapping against the walls of the bay, fresh fish is naturally a local staple, turned delicacy.
Tenerife is world-renowned for its bustling nightclubs, with many overlooking the waters of the Atlantic to the east, making it even more magical when you party until sunrise.
So you’ve shopped till you’ve dropped, stuffed yourself silly and worn out your dancing shoes – what else is there to do in the little time you have left than to stretch out on the beach? And a little to the north of the city you will find Las Teresitas – and a more idyllic, hidden cove you could not wish to find.