October in Ireland came in a particularly wet and miserable fashion, so the thought of a long weekend in a villa in Spain with my daughter was particularly welcome. We had made the arrangements some time earlier, so there was a trouble free run up to the actual holiday, and we flew to Valencia where we picked up a hire car, and had an effortless drive of about 90 minutes to our destinations.

We stayed in an area called Montemar, on a hillside a few miles from the coast. There were numerous villas, ranging from two-bedroomed size, to footballer types worth millions. I do realise this sounds pretty awful to some people, but I must say the landscaping has been very sympathetically done, with many trees and shrubs, meaning all the villas and houses have considerable privacy. The roads are pretty and meander round the hills, making for enjoyable strolls in the sun. 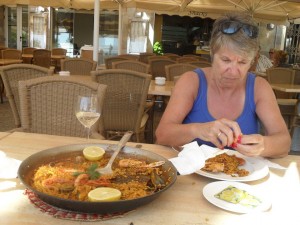 Usually I would advocate getting out there, doing things, seeing places, but somehow this place had a wonderfully soporific effect, making it seem almost sinful not to lie beside the pool in our villa, soaking up the autumn sun.

The nearest town was Moraira, some 4 – 5 miles away. The Costa Blanca conjures up images of billowing dunes of soft white sand. Not so in Moraira! The sand there was more a mud brown colour, and quite heavy.

In spite of this, Moraira has much, very, very much, to commend it. It is a small (ish) fishing and maritime centre about 20 miles north of Benidorm, and about 5 miles from the famous (allegedly) Calpe Rock.

Moraira has had very far sighted and enlightened council, and apparently they issued an edict some time ago banning high rise buildings. As a result, Moraira is one of the most attractive towns on the coast, offering views, vistas, a promenade, a marina and innumerable sea side cafes and restaurants. The offerings range from tapas and paellas right through to afternoon cream teas.

A walk in the sunshine from one end of the town to the other, along the water’s edge is an absolute joy.

The town of Calpe, on the other hand, was not my cup of tea. I found the huge rock towering over the place quite oppressive, although the man-made walkway around the rock was attractive and inviting. And while the sand here was of the soft white variety, for me the close proximity of high rise apartment blocks and night clubs on the promenade were equally oppressive. 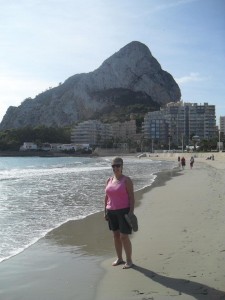 These touristy things were utterly exhausting, so it was with some relief we returned to the villa, to the pool, the sun and a glass of Rioja.