The birthplace of modern music

If there’s one thing that unites all humans, it’s an interest in music. While some can’t stand sport and others shun politics, there’s not a person on earth who won’t tap their feet to some kind of rhythm.

What better destination then to indulge this innate love of music than America’s Deep South: the birthplace of modern music?

Down in the sweltering cities of Memphis, New Orleans and Nashville, music pioneers in the early to mid-1900s began a sonic revolution, bringing the fresh sounds of blues, jazz, country and many more styles, to the ears of listeners in the numerous music clubs and bars. 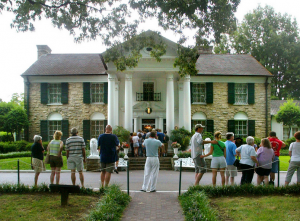 Many of the figures at the heart of this musical awakening went on to become entertainment’s biggest stars, including Elvis, Johnny Cash and Otis Redding. It was these hit makers who helped take the music of the Deep South on an international journey into the living rooms of people in the UK and other far-flung places.

Travel across America today and pay homage to these stars and learn more about the styles they popularised.

Perhaps the most famous of all the musical attractions in this part of the world is Graceland, the home of Memphis native Elvis Presley.

With his shaking hips, huge quiff and catchy tunes, Elvis took the USA by storm in the 1950s. Despite suffering a premature death at the age of 42 due to his unhealthy lifestyle, the King of Rock and Roll is still worshipped by thousands more than three decades after his death.

During a tour around the 14-acre Graceland estate, marvel at the King’s penchant for fancy cars at the Elvis Presley Automobile Museum, which features 33 motors including a beautiful pink Cadillac.

Also check out the singer’s private planes, including the Lisa Marie, named after his only child, which is decked out with $800,000 (£534,000) of modifications that provided Elvis with the ultimate home comforts as toured the USA.

As the home of jazz, the Big Easy is the best place to catch a live performance of this exciting genre of music.

And there is no finer venue to watch top draw performers playing traditional New Orleans jazz than Preservation Hall, at the heart of the city’s buzzing French Quarter.

Nashville is the global centre of country music, with the annual CMA Music Festival attracting hundreds of thousands of visitors from more than 40 nations and all 50 US states.

At the Country Music Hall of Fame and Museum learn about the history of this popular genre through video clips, recorded music and witness live performances.

The building also has some interesting architectural features: the windows look like piano keys and from the air, the layout resembles a bass clef from written music.

But no matter which town or city you’ll visit, you’ll find plenty of musical events going on. The Deep South is literally oozing with culture and heritage, so make some time on your US travels to learn a bit more about where modern music began.

Click here to learn more about travelling through the Deep South.