Afghanistan – outside the capital.

I didn’t see as much of Afghanistan as I would have liked, but the parts I did see were unbelievably, and majestically, beautiful. The sun shone, the sky was blue, and the mountains all around, were snow capped.  It looked wonderful, and outside the city few signs of conflict were visible. 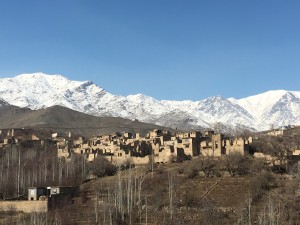 That was until we went to Istalif, a small village approximately an hour’s drive from Kabul.  Given its history, it is amazing that Istalif even exists.  It has been razed to the ground during more than one conflict, but has always managed to recover. It was reputed to be one of the most beautiful places in the country, and since the 16th century, the country’s leaders have had a summer residence here.  That is until the most recent of those conflicts, when the Taliban fought against local Afghans, and along with most of the town, the summer palace was destroyed.
But Istalif is rising from the ashes again!  A small number of artisans, mostly potters, have set up, and are making the most splendid bowls and plates, all from local clay, and the colouring, a glorious turquoise, is obtained in some was from a particular type of rock in the local mountains. There are a number of small pottery shops in the street, but I would think tourists are probably thin on the ground!  I couldn’t resist buying some of the bowls, and get much pleasure every time  use them. The shopkeeper/potter seemed even more pleased than I. 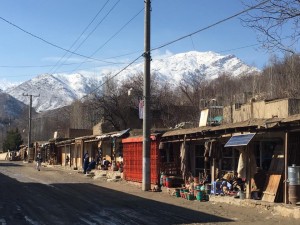 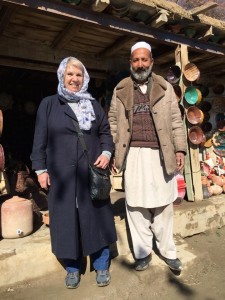 We decided to have lunch in a local restaurant – I say restaurant, but it was a local eating place without any social niceties, and the menu was a choice between take it or leave it! 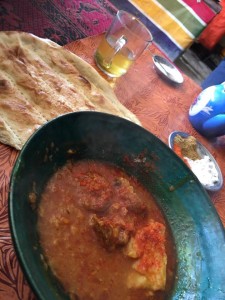 Having said all that, the meat was mutton, bones, fat, gristle, served with flat bread, and quite delicious.
As you can see from the photograph, the pottery from the area is not for tourist consumption, but for every day use.  When I got home, I decided my bowls would also be used regularly -> 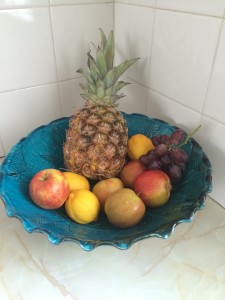 The day before we left Afghanistan, we visited a local reservoir and beauty spot, a short distance from Kabul.  Qargha Lake, is a destination for day trips and holidays for Afghans and tourists, and it was easy to see why – even in January it was breathtaking! 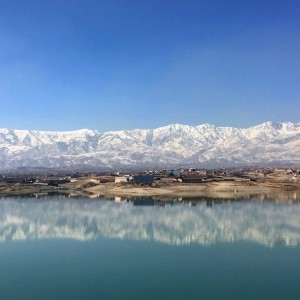 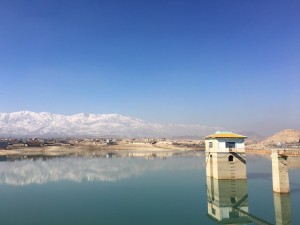 Apparently in season there are all kinds of activities catered for, especially water based ones, and all around are what look like are tin huts on stilts over the water. Some of these are holiday homes, but many are restaurants, and we were fortunate enough to find one open – lunch would be eaten local style, ie sitting on the floor, with newspaper as plates, and no cutlery!  Again it was mouthwatering – fish so fresh that I’m sure it was caught to order! 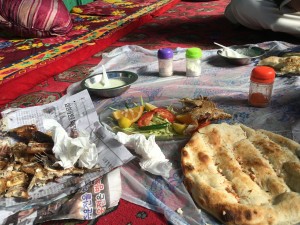 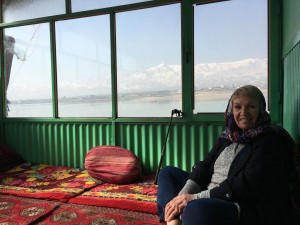 After such a delicious meal, a walk was the order of the day.  and what a joy it was to stroll round the lake in such magnificent surroundings.  Most of the buildings were closed up and there weren’t very many people around, but those we did see were friendly and welcoming.
But it is Afghanistan, and our guide was able to tell us that this glorious place was the scene of a Taliban attack as recently as 2012, and twenty, mostly local, people were killed.
In spite of that, and in spite of the fact that on the day we left there was a suicide bomb attack on a Kabul police station where more than twenty people were killed, I would love to return to Afghanistan, to explore the areas away from the city.  The country is so beautiful, and I have absolutely no doubt that the vast majority of its people are too.