No, I hadn’t heard of it either. Harbin is a large industrial city (4 million people) in the north east of China, and has been fought over by Russia, Mongolia and China. Thus there are very obvious influences of all these diverse nationalities there – Russian churches, Mongolian horse men, and Chinese everything. It is incredible! 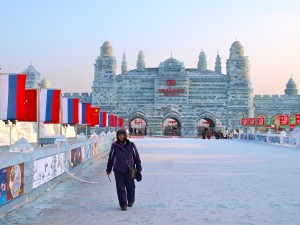 For probably the first time in living memory I was literally dumbstruck with sheer awe when I first went into the actual festival area. I have never ever seen anything like it. As a spectacle it is truly amazing!

There is a whole small town made out of blocks of ice, and these are filled with what looked like neon tubes and lit up after dark – truly magical.

I wish I had the words to tell you what it’s really like. Photographs do not begin to do it justice. The sheer scale of the undertaking is incomprehensible. It is impossible to explain the wonder of it, and while the pictures I saw before hand were mind-boggling, they paled into insignificance when compared with the reality. hildren just embraced the whole experience with joy, while most adults were dumbstruck. Inevitably there were those who thought it ‘cute’!  There were replicas of famous buildings, albeit on a slightly smaller scale. We saw Tower Bridge, what looked like The Kremlin, the Bridge of Sighs and many many more. There were castles galore, none of which I could definitively identify, there were churches. There were huge coca cola bottles dotted around the site, signifying western sponsorship perhaps, and there was also a proliferation of Russian flags alongside the Chinese ones. 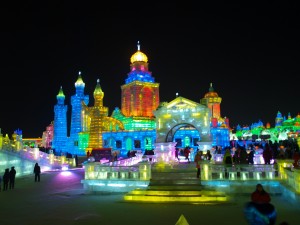 Harbin might not be well known in the west, but there was certainly evidence about to indicate the giant companies are moving in. In the city itself there are innumerable recognisable brand names (along with the equally recognisable fakes). Starbucks was in evidence, along with the various food emporiums – golden arches anyone?

However, even this obvious commercialism could not detract from the absolute wonder of the snow and ice sculptures. Take my advice and go and visit, I don’t think you will regret it.