More correctly, the Maltese islands, for there are three main ones, Malta, Gozo and Comino, two of which, Malta and Gozo, are inhabited. These are in the southern Mediterranean near to Sicily, and thus enjoy a similar climate. But there the similarity ends, for the Maltese see themselves as very different from their neighbours, and indeed they are. Their history is rich and varied, and this makes their genetic makeup equally so. When you consider that the history began before, and included the Phoenicians and Carthaginians, and also encompasses theTurks, French, English, Italians, you can see this is a fascinating mix. The language too is a mixture mostly of Arabic and Italian, but there are also frequent hints of other European roots.

The people are warm and welcoming, and fortunately for people like me, are comfortable speaking in English as well as their own language. In fact, my experience is that many are polyglots and appear to be happy to converse with tourists in their own language.

The history of the Maltese islands is fascinating and there are innumerable examples of the many occupants/conquerors throughout the ages. 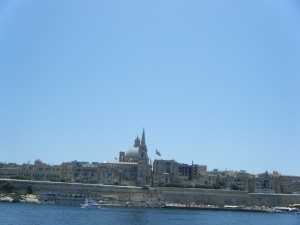 In my experience, the capital, Valletta, makes a great base from which to explore. I can recommend the open top bus tours as a terrific way of seeing the important sights. There are a few companies operating on the island of Malta itself, and also at least one operating on Gozo. Those on Malta leave the centre of Valletta at regular intervals, and are ‘hop on, hop off’. They stop at most of the ‘must sees’, and it’s just a matter of getting off, seeing whatever you want to see, and getting back on again as soon as the next bus comes along – simple.

I found walking the best way to see Valletta, it’s quite small – around 1km by 1.5km, but be warned, quite hilly, in fact very hilly! The streets are built in a kind of grid formation, so with some modicum of directional sense, it is easy to navigate your way about. 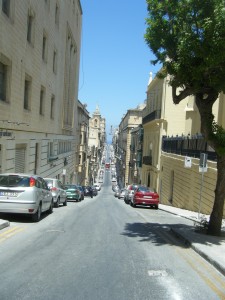 Be careful when walking round, the old streets are very narrow, and the footpaths only about 50cm wide. Cars and vans can appear in the most unlikely places, and I found it amazing to see where some of them were able to park.

The main shopping streets, Republic Street and Merchants Street, are mostly pedestrianised, and many of the restaurants have outside seating in the middle of the streets, and I can recommend eating outside and watching the world go by.

Give Malta a try, the weather is invariably fine, the people welcoming and loads to do – what’s not to like?