I can almost hear people asking, ‘what’s this about, this is a travel site’? Because a year ago I would have asked those questions too.
Not anymore, because last summer I was diagnosed as having Parkinson’s Disease. To say I was shocked would be an understatement. Initially I appeared to be dealing with it all very well – this wasn’t going to change my life, this would make little difference, I would just carry on as normal. Huh, I don’t think so! In retrospect I can see that was a shock reaction, and since then, I admit I have struggled with acceptance. I have come to recognise a diagnosis of a chronic degenerative illness brings about almost a grief reaction. I think I have gone through all the Kubler Ross stages of grief – denial, anger, bargaining, depression and, at last, acceptance.
Thankfully, currently my symptoms are quite mild, my balance is a bit iffy, but I can still ride my bike and go up a ladder (the latter very carefully!); my shake and rigid limbs are confined to one side, and are not really apparent; my gait has changed, (but I’m fighting that one, trying to lift my feet properly and not stoop over); and my fine motor skills are not so sharp. I also get tired more easily, and I think my immune system is not what it was.
Writing it down makes me realise it’s really not that bad, and I should be like Pollyanna and count my blessings – but sometimes it’s difficult!
And I can still travel! My Central Asia trip was a few months after diagnosis, and I coped with that. It entailed travelling to Bishkek via Bangkok and Seoul, hundreds of miles through Krygystan, Tajikistan and Uzbekistan mostly by train and taxi, walking round various towns and cities, visiting places on the Silk Route, and buying some exquisite plates and teapots. 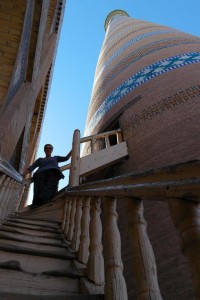 Having said that, they were some of the most amazing countries I have ever visited, and I was determined not to miss a minute.
The next major trip will be South America. I’m not sure exactly which countries, but am hoping for at least one of Patagonia, Bolivia, Colombia or Surinam. It will definitely be in the autumn, and South America has been on my wish list for more than forty years, so I must be fit and able for that.
Also in the pipeline is a skydive for my 65th birthday in a couple of months. Initially it was just a challenge, but now I’m going to try to raise some money for Parkinson’s research, and my Just Giving page should be up and running soon.
Elisabeth Kubler Ross also said “Live so that you do not have to look back and say, God, how I have wasted my life.”