Travelling Spain is a lot of fun. The country is a real treasure for those who can appreciate culture and traditions.

Each part of Spain has something interesting going on each month but the biggest event-catcher is surely its capital, Madrid. The city itself is a beautiful spot where one can spend a lifetime exploring it. Its architecture is luxurious, its food is delicious and its people are very interesting. If you want to get the best from Madrid you might need to plan your visit. This way you can choose which of the amazing festivals you want to join. 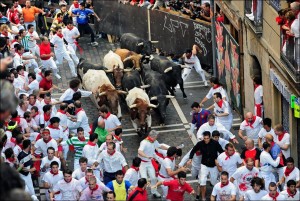 To start with I would recommend Flamenco festival. Held annually in Albeniz Theater it attracts thousands of visitors from all over the world. Melodic music, passionate dances and incredible atmosphere make it a must see cultural event in the city. Albeniz Theater is situated in the center of the city so you can enjoy Spanish food in one of the countless luxurious restaurants like Amalur Madrid.

After a nice flamenco warm-up, you would be ready to taste some of extreme Madrid festivals. And the most exciting of such is definitely a world famous Bull running festival. The rules are very simple: you have to run from the bulls, which are to be send free to run through a narrow streets of a Spanish capital. Important tip is to make sure you are in a good physical shape before you join the festival, because if you are in there is no way back. Your physical abilities should be reviewed seriously as there are cases of injury each year.

Last but not the last festival that I would recommend to attend is La Endiablada festival.  It is held in a little town Almonacid, situated in an hour from Madrid. It is the wackiest festival of the country.  It is often compared to Halloween as this time people dress in a various costumes, imitating devils and ghosts. The festival is more a tradition for Spanish. The main idea of La Endiablada is to dress up so evil spirits won’t recognize you as a human. Just as Halloween, the festival is a lot of fun and usually ends with a great party.

There is also one festival that is famous for being the cruelest of all; it is called Toro de la Vega. It is held every year in a tiny town near the capital city. The main aim of the festival is to sacrifice a bull. It begins with a release of the bull, which is soon hunted by all citizens of the city. After that people stab him with spars until he falls down. Toro de la Vega is one of the most questionable festivals one can ever attend at the same time it is insanely popular among the locals.

As you see, there are many festivals that are interesting, fun and sometimes even cruel.