Quirky Spanish Events in the Canaries

The Canary Islands, made up of 7 large islands and a few smaller ones, are akin to paradise with their pristine beaches, warm climate and variety of interesting natural and cultural attractions. Although they’re located off the northwest coast of Africa, the Canaries are a part of Spain and retain plenty of Spanish culture and flair! There are planty of quirky Spanish events to enjoy on the Canaries- here are a few not to miss: 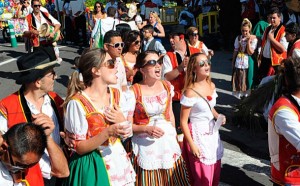 Romerias These are Spanish Catholic celebrations signifying a religious pilgrimage (the name Romeria originally meant “journey to Rome.”) Today, the island of Tenerife (largest of the Canaries) is home to many romerias throughout the year. The people dress in elaborate, traditional costumes and march along in a procession with their town’s patron saint, usually with decorated floats and plenty of music, great food and cheer!  Book a stay in Tenerife with Tenerife Holidays during one of the romerias: St. Mark is celebrated on April 29th, then several other celebrations occur throughout May and June. It’s a true taste of Spanish culture with an island vibe!

Baile de Magos Magos translates to magician, but on the island of Tenerife this is an expression simply meaning peasant– so welcome to the Dance of the Peasants! People on Tenerife all dress up in traditional costumes and enjoy traditional music and food, usually outdoors and with plenty of festivity. They happen year-round in nearly every municipality on the island, but most often from May to August. You could learn the Canarian polka, learn how to play a traditional instrument… and make plenty of new Canarian friends at the party!

Island Crafts Fair The island of La Gomera has an annual craft fair showcasing arts and crafts from all over the islands. Craftspeople come from all over the Canaries to show their works and perform traditional music- and even a La Gomera whistling show!

Lucha Canaria Canarian wrestling incorporates folk traditions and is an important cultural event on the islands. The wrestlers start in a circle of sand, and the goal is to make their opponent touch the sand with any part of their body except their feet. If you get a chance to watch Lucha Canaria, enjoy the immersion in the mix of Spanish and North African culture through this sport!