I was in Syria recently, and for much of the time we stayed in Damascus, in the Beit al Mamlouka Hotel.
Various websites describe al Mamlouka as “a luxury boutique hotel in the old part of the city of Damascus’, but I have to say that such a description does not begin to do it justice.
From the outside it is very un prepossessing, just a sign on a wall and a door – nothing else. 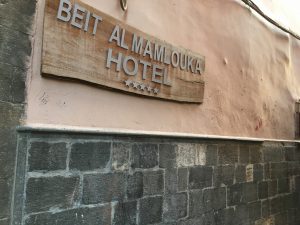 But once inside – what a difference!   It is a beautifully restored 17th century house in the Christian quarter of the ancient city of Damascus, consisting of only 8 rooms, all named after different historic Arab figures. These rooms all open onto a central courtyard, an oasis of calm, with a fountain and a large citrus tree, where not a sound of the mayhem that is the city centre intrudes. 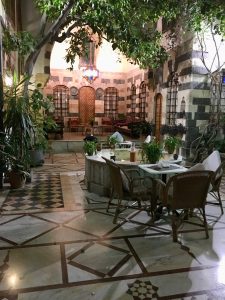 The hotel was established in 2005, and to the huge credit of the owner and his staff, with the horror that Damascus and Syria have faced in the interim years, impeccable standards have been maintained all round.
There were 12 people in our party, and during our time there, the hotel was exclusively ours. The staff were, without exception, quite incredible. Nothing was ever too much trouble, and they all tried to anticipate their guests wants and needs. This wonderful service was never obsequious, at all times dignity was maintained, and it seemed that when guests were happy and satisfied, so too were staff members.
The English spoken by the staff members with whom we, as guests, had most contact was unbelievably high. Lauren and Grace, the receptionists/concierges/guest ambassadors/etc cannot be praised too highly. They certainly went the extra mile for us, and it was hard to believe neither had ever spent any time in the west, given the standard of their English.
My room was awesome, the huge bed was one of the most comfortable in

which I have ever slept, the bed linen seemed to me to be of a very high thread count, so soft and comfortable was it. 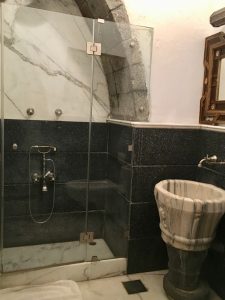 There was steaming hot water any time I used the shower and again, bathroom fixtures and fittings were of a very high standard.

We learned , while in Damascus, that electricity supply can be erratic, and this often took a few minutes to rectify. Not so in this hotel, their generator kicked into operation almost immediately, which was a huge plus.
Our group’s stay in Beit al Mamlouka was on a bed and breakfast basis, and what a breakfast! It was nothing of a breakfast banquet – the table was laden with deliciousness.

On our first day we left Beirut in Lebanon and travelled to Damascus by road. Because of civil unrest in Beirut, we left our hotel there at 04.30am, travelled by taxi to the border, Lebanese emigration, transferred to a bus, to Syrian immigration, and hence to Damascus, taking between 4 and 5 hours. When we got to Damascus we tired and hungry, and not looking forward to finding somewhere to eat. Imagine our delight when we were confronted by the first breakfast feast, laid out for us when got to the hotel. Just wonderful!
As you may realise, I have no hesitation whatever in recommending Beit al Mamlouka Hotel. More than that, I would urge you to go to Damascus just to stay there!