In the Central Alps of Japan can be found a very very large number of natural hot springs called onsens. The onsens are used therapeutically, in much the same way as a spa in the west. The city of Nagano is the hub of the area, and some 25 kilometers from Nagano is a national park which is home to a colony of Macaque monkeys known as Snow Monkeys. What makes the Snow Monkeys differ from the other Macaques, is that they also use the onsens, albeit the outdoor ones. 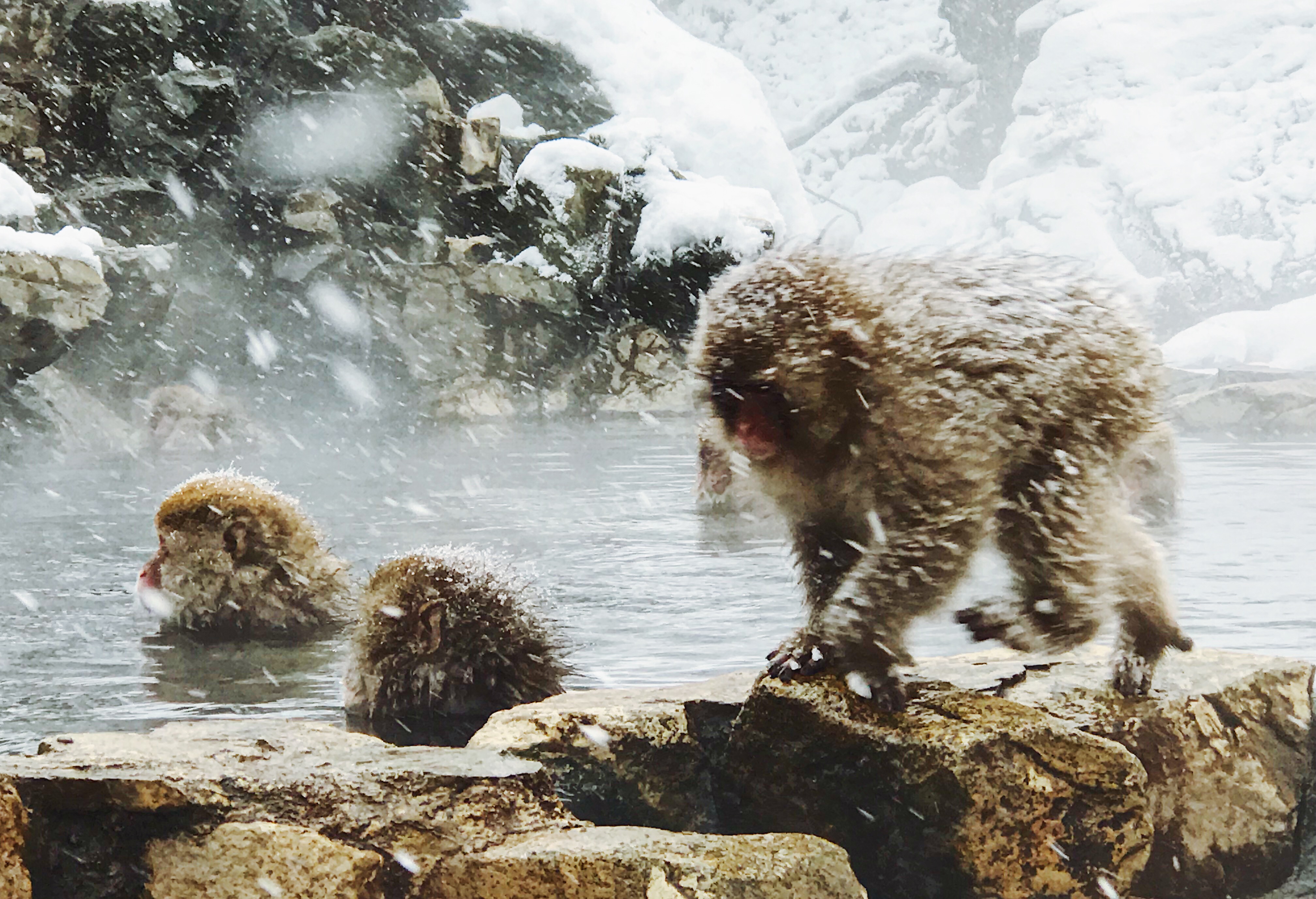 Inevitably the Snow Monkeys have become a huge tourist attraction, though to date, the area around the national park has not been developed, and so coming from Nagano is a bit of a trek involving buses/taxis/trains.
In the local area are a few ryokans, or traditional Japanese guest houses, many with their own onsen, and the jewel in the crown of these is Jinopykaku Honten. 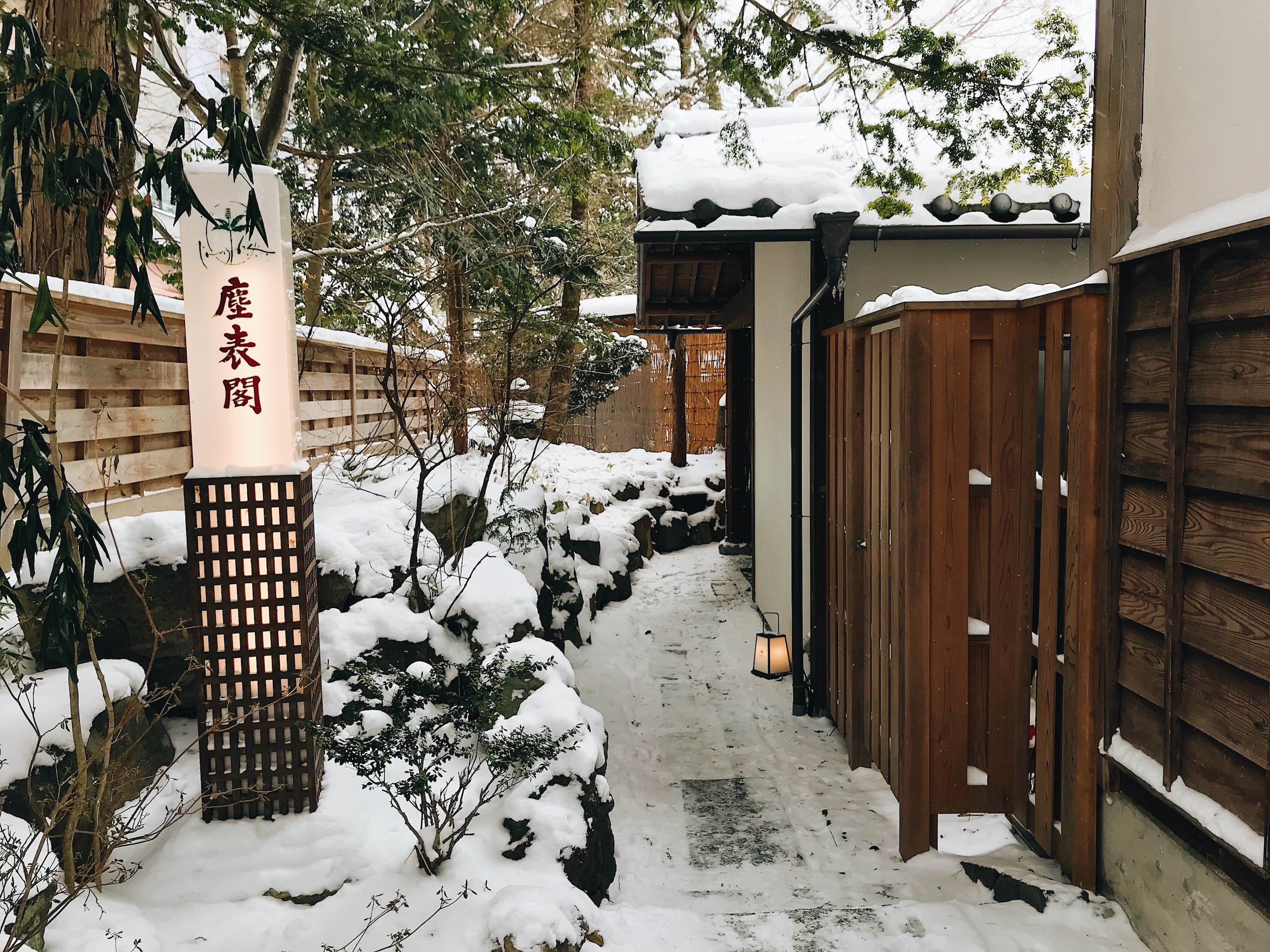 It has a long history, having been established in 1901, and apparently has been loved by many of Japan’s cultural icons, including a Nobel Laureate.
Jinopykaku is run in a very traditional Japanese manner, although all modern facilities, including wifi, are available throughout the house. There are only six rooms, some of which have a small private onsen, but the number of rooms does not necessarily indicate the number of guests, because part of the tradition is that guests sleep on individual futons, side by side, which are set up by staff each evening. Initially we were a little concerned, but, in my opinion, these were every bit as comfortable as a five star bed.
When we arrived at Yamanouchi station, we were met and taken to Jinopykaku Honten, where we were each given a traditional Japanese costume, and also instructions as to the use of the communal onsen.
We had arrived late in Yamanouchi, so dinner was served at the Honten soon after; and what a dinner it was! Course after course, food kept appearing, until it seemed there was enough food on the table to keep a family of four for a week!
The table at which we sat was low, almost typical Japanese but raised a little for those of us who would be uncomfortable actually at floor level. 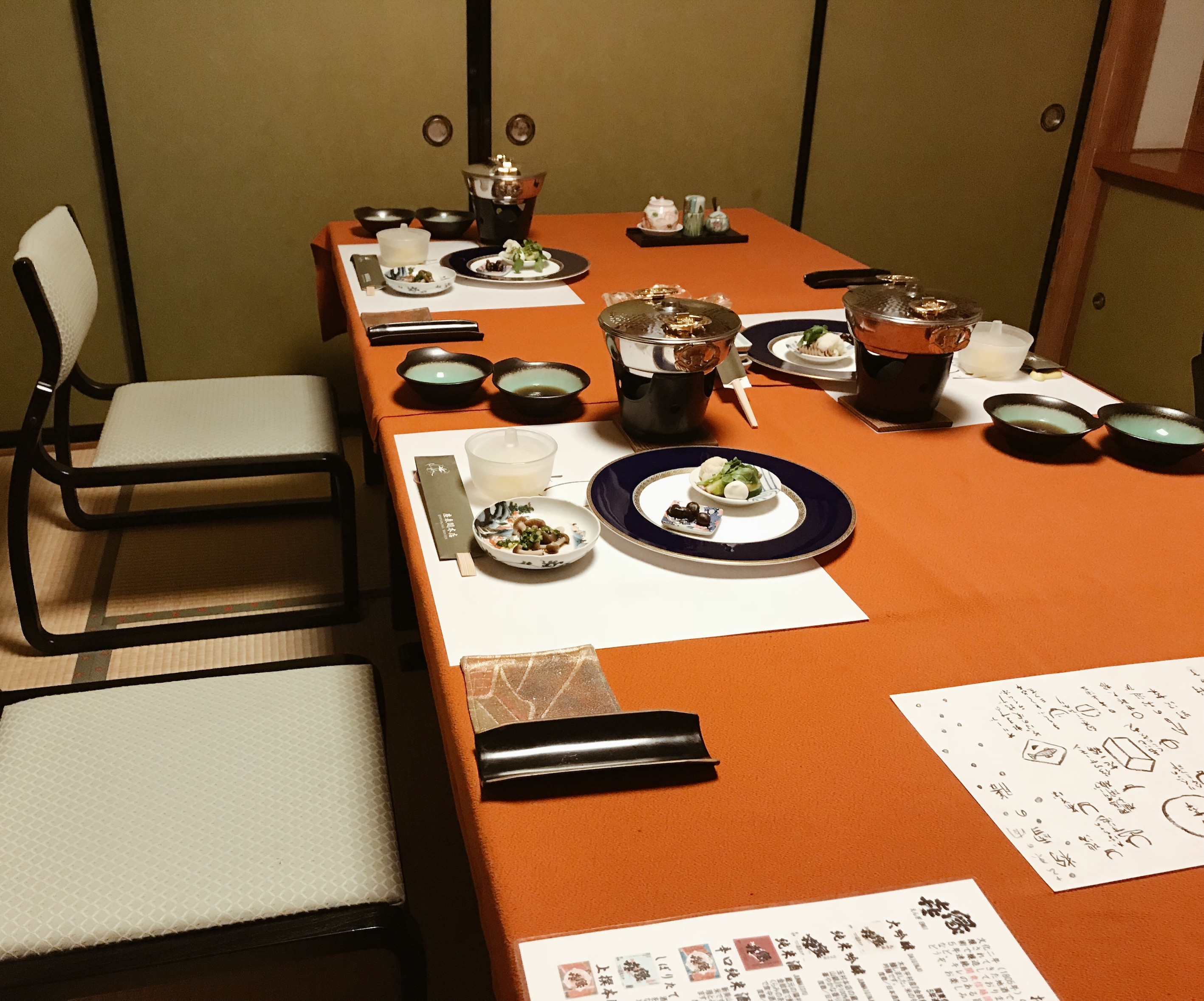 The ladies who served the meal were dressed in national costumes, and also carried out their duties in the tractional way – staying very low, never turning their backs, and much bowing. We had vegetables, fish, beef, chicken, noodles, including soba noodles, miso soup, all beautifully presented; and to drink, ordinary sake, plus apple sake, along with soba (buckwheat) tea to finish. It was almost overwhelming, and, given the mores of Japanese culture, and how unfailingly polite people are, it was virtually impossible to refuse. 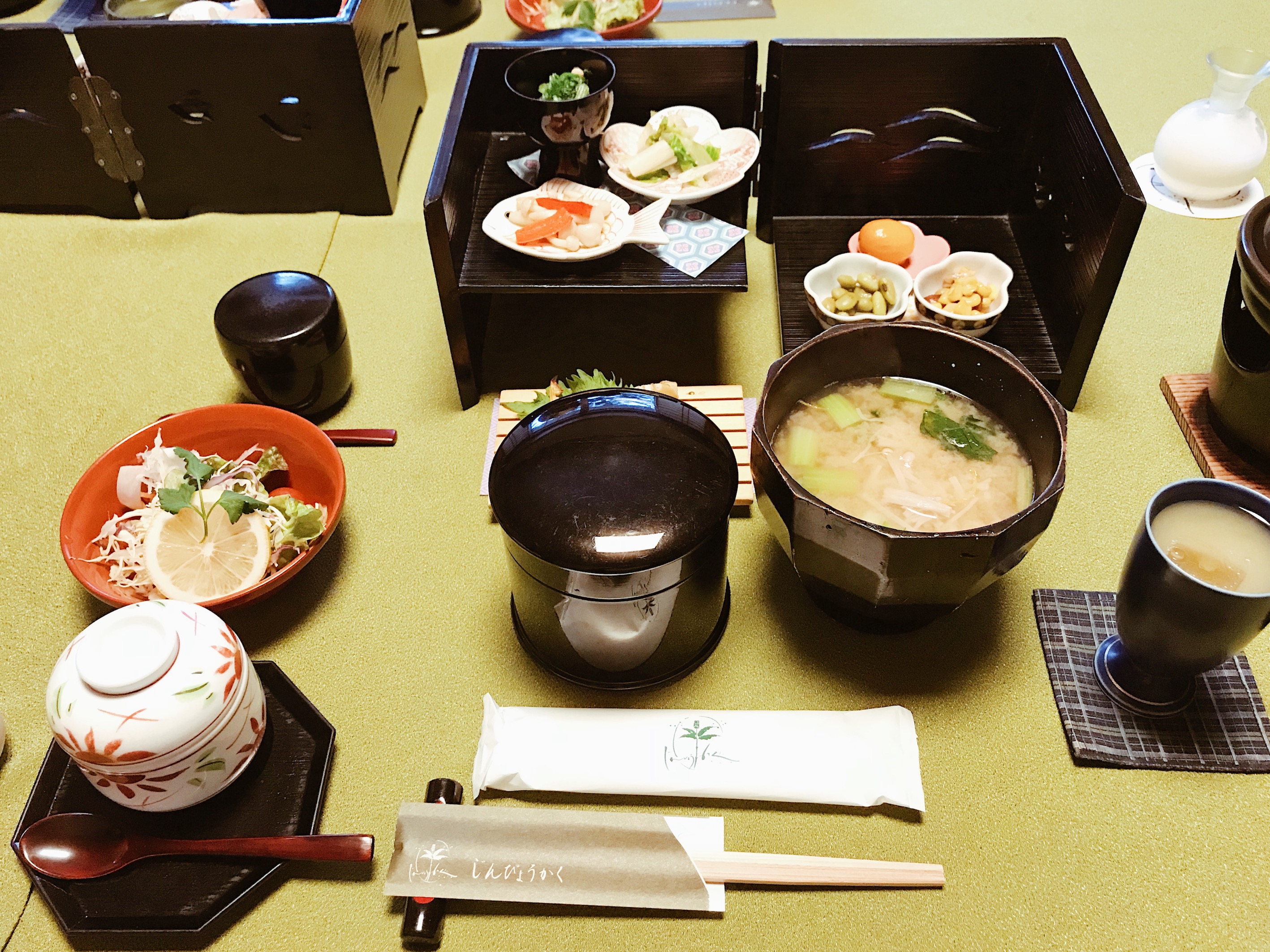 After dinner, it was time to try out the onsen. There was a mixed open air bath, and also one for each gender. Traditionally the sexes did not mix, but in more modern times it is acceptable, and special robes for wearing in the mixed baths were available if required, and segregated showers for use before and after the onsen were pointed out. I found the onsen naturally very warm, and oh so relaxing. 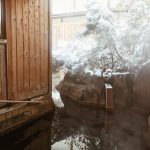 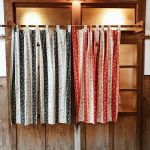 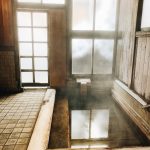 By this time we were all ready to retire, and slept soundly.
We had arranged to have breakfast at 08.00 the next morning, and we returned to the same dining room. Breakfast was every bit as abundant as the previous night’s dinner, and to me , the food seemed very similar – meats of all kinds, fish, miso and noodles, but again, so much food!
Off to the Snow Monkeys, and when we returned, it was time for another session in the onsen, and then more food. Fortunately, our inability to eat everything on the table had been noted, and there was a little less on offer, very similar to the previous night – although still too much. 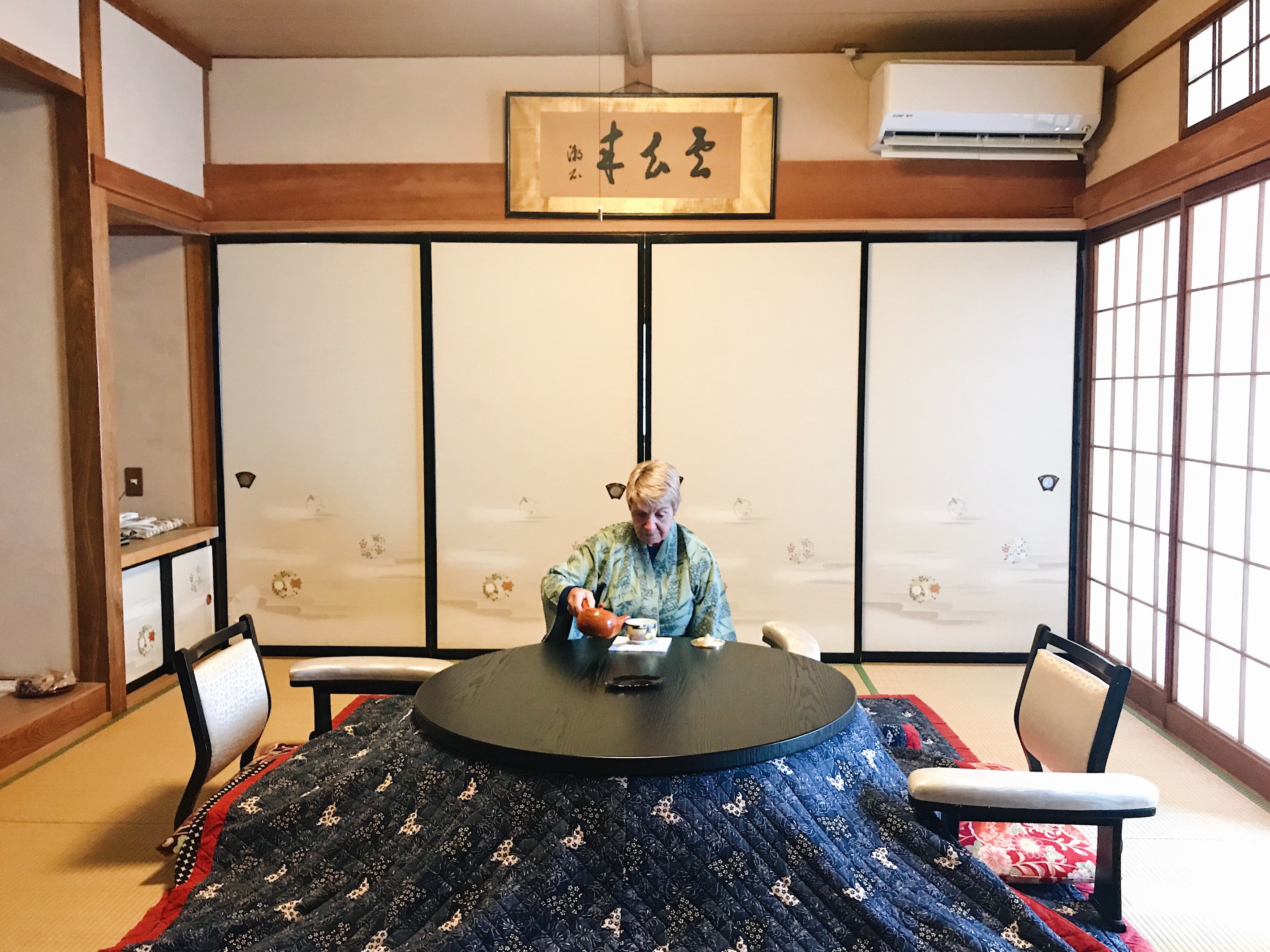 After another night’s sound sleep, we left Jinopykaku Honten very early the next morning to catch a train up north to Niseko. We were taken to the station, and the elderly owner of the Honten came to bid us farewelll. We were also xiven a breakfast box to have on the train.
What an amazing encounter it was, and while Japanese food will never be my favourite cuisine, I feel enormously privileged to have been given the opportunity to experience Japanese culture so closely. I would, without reservation, recommend it to anyone interested in other civilisations.