The Hop On Hop Off open top bus which tours the north of the island of Malta leaves the Bus Terminus in Valletta every half hour. There are two routes – one shorter one which just goes as far as Mosta, and a longer route which takes in a trip round much of the coastline. The two routes are interchangeable, in that one ticket does both.
The exit from Valletta itself is exactly the same as the south tour, but they diverge after the Valletta Waterfront, with this route going via San Anton Gardens to Mdina and Rabat. 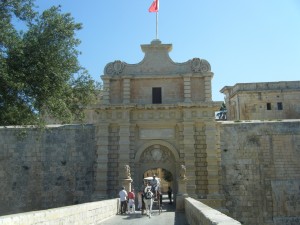 Mdina is in the middle of the island and is the original capital of Malta, named by Sicilian Arabs and abandoned when Valletta was built, at which time it earned the nickname of ‘Silent City’. It’s easy to see why this nickname has remained because the narrow streets are hushed, and there is an air of silence inside the moat and walls. It is another absorbing place to visit, and just strolling through the streets, having a coffee, watching the lace makers’ makes for a splendid few hours.

Don’t ignore Rabat, adjacent to Mdina (in Arabic the names means suburb) and also displaying some of Malta’s amazing history. The Domus Romana, right outside the Mdina moat, is a building from Roman times, restored and now a museum housing statues from that era, and the most fascinating mosaic floor. Although I am not particularly interested in Roman history, I am glad I didn’t miss this.
Rabat would seem to have a thing about underground burials, because in a small town (population about 12,500) there are two churches with catacombs – St Paul’s and St Agatha’s. St Paul’s is so named because it is close to the grotto where St Paul is supposed to have spent some time. I’m afraid I cannot comment on either of the catacombs, because I do not do deep underground places! I did look at the churches, though, and St Paul’s has two small chapels underneath the main church, which, I understand, are interesting – one can see the relics of Roman torture because, prior to being consecrated, this was used as a Roman prison.
St Agatha’s also houses a small museum, but I have to say, for me there was little of much interest.
The town is much like any other, but interesting for a stroll if only to see how other countries live.
The next stop for the bus is at Ta Qali. This is the craft village of Malta, and, I’m afraid, appeared similar to every other craft village in any country where there are tourists. It was not somewhere I got off the bus.
Next to Mosta where the rotunda church is the third largest unsupported dome in the world, and quite a sight, but the outside can be viewed easily from the bus. 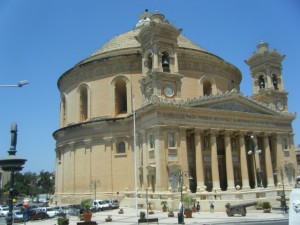 Mgarr, the next place/church on the route has a similar shaped domed church, though smaller. It was intended to be a smaller version of Mosta, but ended up more ovoid, explained by the fact that it was funded by selling eggs!
The remainder of this bus tour is a journey round the various resorts in Malta. It is possible to get off at any of these, but I stayed on the bus and enjoyed the fantastic coastal views and scenery.