My Adventure in Stockholm

Stockholm is one of the most diverse and culturally captivating cities that Europe has to offer. This being the case, I have had the pleasure of frequenting Stockholm on various occasions. However, those who may not be familiar with this city may find themselves overwhelmed with the amount of options they have on a limited budget and time frame. So, I found it wise to put together my choice of the top three attractions that this city has to offer. 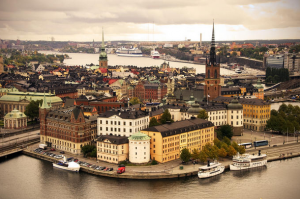 Why not begin when Stockholm was first founded? Originally created in 1252, Gamla Stan is actually one of the best preserved medieval towns in all of Europe. The serpentine cobblestone streets provide a modern-day looking glass into the city’s past, and many ancient frescoes and ancient cellar vaults are dotted throughout this area. Also, Sweden’s oldest town square can be found amongst these streets. It is named Stortorget and each year it plays host to the annual Christmas market. While ancient history is a must, the Nobel Museum is also conveniently located within Gamla Stan. Here one can partake in the rich history of the Nobel Prize as well as view some examples of the innovative discoveries that have brought us into the 21st century.

On the topic of history, one absolutely needs to take a few hours and stroll through the Vasa Museum. Over one million visitors flock to this museum each year, allowing it to boast the title of the most famous museum in Scandinavia. One of the most interesting attractions displays the maritime history of the region, as this museum contains a warship dating from 1628 which sank on its maiden voyage. The main difference between this ship and others found throughout Europe is that the hull and structure is still close to 95% intact, thus making this exhibition one of the most historically accurate in the world.

While the affluent history of Stockholm cannot be denied, this city also boasts some of the most tranquil spots to grab a croissant and coffee in the golden morning hours of a beautiful spring day. The Kunsholmen Harbour is an excellent location to bring a friend and take in the sights of all the numerous fishing boats which dot the shoreline. This location is also well-known for quiet French cafes tucked away on the countless side streets. Simply said, this harbour is perfect for those who wish to escape the hustle and the bustle of the city centre and obtain some much-needed rest and relaxation.

Stockholm has the pride of being named one of the cleanest cities in the world and was actually the first city to be awarded the coveted title of a European Green Capital. One look at this spectacular park and the visitor can appreciate the lengths the city has taken to reduce its urban footprint. One unique aspect of this park is the fact that although it is located in the city centre, it is still attached to the outlying forest that surrounds the city. Therefore, not only is this location a convenient way to take in a bit of sun and nature, but many species of wildlife can be encountered. Such diverse animals can include deer, foxes and even moose. Indeed, one will quickly forget that this wonderfully landscaped park is actually located within the centre of Stockholm itself.

Of course, these three destinations are but a small handful of the diverse culture and attractions that Stockholm offers to the millions of visitors it caters to each year. One major advantage for the financially-conscious traveller is that cheap flights to Stockholm abound and can accommodate nearly every budget and timetable. Why not take a look at a major airline’s website like SAS? Indeed, no trip to northern Europe will ever be complete without taking the time to visit this eclectic city and enjoy all the sights and sounds it has to offer.