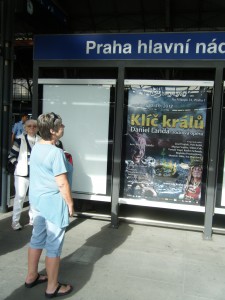 I had never heard of Kutna Hora, a town about 70 km (44 miles) from Prague.  However, after noticing a number of tours going there, I did a bit of research and decided to visit.  Kutna Hora was centre of power and influence, and the site of the Czech mint, during the reign of King Wenceslas ll.

I took the train to get there, and although the station at Kutna Hora is actually at the village of Sedlec and very much on the outskirts, there are frequent local buses to the centre of town. I also found there is a very helpful tourist information office at the station. The station is easily within walking distance of the first of the sites to see – the Bone Church, of which more later!

It is still possible to see the vestiges of Kutna Hora’s early prosperity, to visit the silver museum and have a tour of the Hradek mine shaft, one of the silver mines from which the ore for the mint was extracted. The tour takes about an hour and a half and, provided you are not claustrophobic, is quite fascinating.
There are also two churches which are designated as World Heritage Sites, and are themselves worth seeing, though I have to confess that churches rarely do it for me, unless there is something very unique to see.
Having said that, the Gothic cathedral of St Barbara, the patron saint of miners, is quite a spectacle, with its soaring spires which can be seen for miles around. It is so ornate, it took close to 200 years to be fully completed 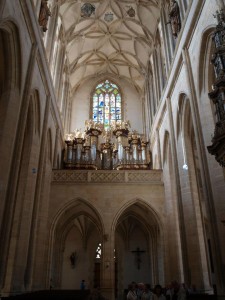 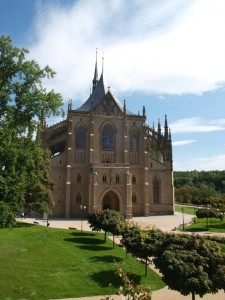 The other UNESCO site is the Cathedral of the Assumption of the Virgin Mary another Gothic masterpiece and known as the Cathedral of Light because of the windows which allow sunlight inside every minute of the day.

For me however, Kutna Hora was all about the Ossuary of Cemetery Church of All Saints at Sedlec, better known as the Bone Church. From the outside it looks like any other church, but from the minute you step inside – wow! 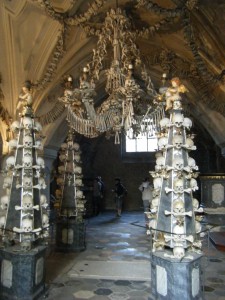 All the decorations are made from human bones! I realise this sounds quite macabre, but actually the sheer scale of it somehow reduces the horror, and it was gruesomely fascinating. 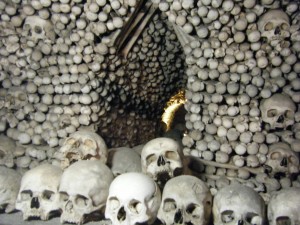 I found myself looking at decorations and identifying various bones – vertebrae used for this bit, scapulae used for that, and ribs for something else! Apparently the bones came from victims of wars and plague in the 14th and 15th centuries who were buried in mass graves in the cemetery, and as the area developed and the bones were uncovered, they were put to good use!

It is truly astonishing, and should not be missed.
For me, visiting the Bone Church first may have been a mistake because I was so blown away by it, that the others almost paled into insignificance in comparison. I have looked at my photographs since, and am still go smacked by it.  I would say to anyone visiting Prague, make sure you go to Kutna Hora – you will not regret it.